As much as I consider myself a courageous individual, nothing could have prepared me for life in Bangkok. No guidebook, travel blog, or friendly words of wisdom from a seasoned traveler could have prepped me. From the moment I arrived, I was tested in ways I never could have imagined.

Dragging my luggage from my final safe haven, the airport, and into the suffocating humidity called Bangkok, it hit me. This was for real. I was alone… in another world, without the faintest idea of the language… And I didn’t know a soul. My heart skipped a few beats at this realization.

Oddly insensitive to my situation, the taxi driver shrieked at me as he sped down dusty alley ways at an alarming rate, scouring for my hotel address I had jotted down for him on a post-it. It hadn’t crossed my mind that I should have had it written down in Thai as well, as he couldn’t read English. I crossed my fingers and sternly shook my head “no” at his several attempts to dump me on the corner of random streets. He was frustrated, and I was terrified. I didn’t know whether to laugh or cry. But then, finally, there it was… the place I had booked for three nights… the Sweet Honey House.

Now, you may be wondering my reason behind booking a hotel called the Sweet Honey House, and I have to be honest: I don’t have one. It’s what I’d like to call a foolish mistake. As I lugged my bags into the Sweet Honey House, it all became painfully clear: I had booked a whore house. From the expression on the “receptionist’s” face, I was obviously the only person staying for the nightly rate rather than hourly.

I threw my bags in my miniature windowless bedroom and immediately bought a pack of cigarettes. I decided if there was any time for me to become a smoker, now was the time. I had not been in Bangkok one hour and had already managed to check myself into a whore house. Cigarette please!  I sat outside on a rickety plastic chair, compliments of my “hotel”, lit one up, and watched in disbelief as a dizzying number of prostitutes and massage parlor employees sauntered up and down the street in broad daylight.

Time went by, as it always does. I hunted down a doctor and indulged him in a game of charades as I acted out my symptoms and he guessed my illness. He eventually gave up and handed me a bag stuffed with pills and mimed that I should take them somewhere from 15 to 25 times a day. Fair enough.

The daily struggles of my life were winning over moments of relaxation and ease by an overwhelming margin. I wondered if any of this was worth it. I wanted to pack my bags and head west. But then…

And suddenly, I didn’t want to go home anymore. I found myself becoming captivated by this hectic, endearing, noisy, polluted, beautiful city. I was charmed by the smiles of the Thai people and their genuine friendliness toward a naïve blond-haired foreigner such as myself. Wandering aimlessly through the streets, I felt more alive than I had in a long time. I felt more in-tune with the present moment than I had in ages. That’s the thing with this city: Bangkok forces you to remain in the present. Day dreaming is dangerous. If I committed such an act, I’d be in harm’s way of being run over by a motorbike or tuk tuk.

Among other things, I learned that if anything will keep me somewhere, it is an addiction. I developed a severe addiction to Chai yen (Thai iced tea). If I left, I would have to give that up. I would also have to say goodbye to my morning mango vendor man, which seemed like a tear jerker in itself. I had no choice but to stay.

I remember the exact turning point when I realized I wanted to stay. I was sitting on my friend Prina’s balcony. Prina is from Nepal and cooks the most amazing Nepali food I have ever tasted. Well, the only Nepali food I have ever tasted, but I am highly convinced it is the best around. We were sitting side by side on her high-rise balcony, delirious from a food coma, sipping on Chang Beers and chatting about how very different our home countries were from one another. It was about 10:00 at night, but still unbearably hot and humid. We were gazing down at the shacks below us, and at the street vendors and traffic still out in full force. She turned to me and said, “You aren’t leaving Bangkok, are you?” And that was it.

At that moment, looking down on the mess of a city bursting with life beneath our dirty feet dangling over the balcony, I realized there was nowhere else I wanted to be. I was starting to get used to Bangkok… and dare I say, LIKE Bangkok. I felt a twinge of happiness.

I loved the madness, the people, the food, and the sheer life that this city exuberated. I loved the clash between old and new, the high rise buildings towering over ancient Buddhist monasteries. The BMW dealerships sprinkled amongst rotting wooden shacks. I reveled in the confusion of it all. In fact, I sympathized with the confusion of it all. Bangkok and I seemed to have something in common, and I wasn’t ready to give up on the relationship. Not yet.

Prina and I enjoying some tall cans of Heineken…

And the protests… brink of civil war April 2010 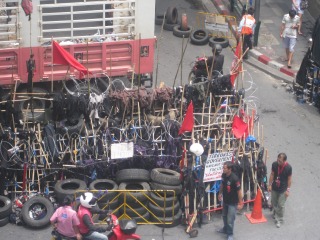 Welcome to my Blog!

Born to travel, born to write. Insatiable appetite for the open road and spicy food!